Are You Special, Or Are You Unique? 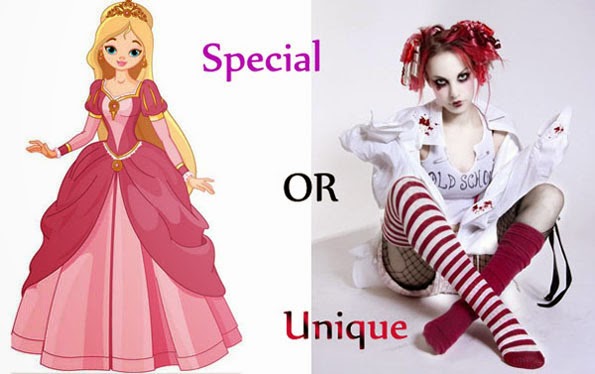 Many individuals have the idea that they are special, or that (certain) humans are a special creation of some kind - more important than other entities. The idea that we were specially created does not merely apply to mainstream religious thinking. It can also apply to those that consider themselves spiritualists, with no specific religion.

Obviously if one's self esteem is low, or at least not as high as they think it should be, then the idea that they were: specially created, more so than any other 'creation', or even a part of something special, could only be seen as something positive. Therefore they would be quite willing to believe this idea.

Who or what is special?
To put simply the desire to feel special is a yearning to feel 'above average', rather than feeling merely 'ordinary'. This desire to feel 'special' would usually be based on an emotional need (or more accurately a want), rather than a calculated one.

Of course one can intellectually formulate a plan on how to make themselves feel special, or to have others see themselves as such, but the initial desire is still an emotional one. If individuals have a desire to evolve, to improve themselves in some way, then feeling special or being considered special by others would be an obvious indication that one had bettered themselves; in so much as they are considered 'special' in comparison to their peers.

It is arguably far easier to merely believe (or more accurately be convinced by yourself or others) that you have evolved, rather than put any substantial effort into your own inner development. Therefore seeking to feel or be labelled as 'special' is one way of believing that you have bettered yourself; by effectively being thought of as better than those around you.

There are of course those that only want to be seen as 'special' in the eyes of a few select individuals, if not only one certain individual. These individuals may not actually want to feel as though they are better than anyone else. Rather they are likely seeking a sense of normalcy, at least in  comparison to those that they consider to be the norm, as their own self esteem is extremely low.

This can take the form, perhaps most prevalently, of wanting a lover to treat them as though they are the most special person in their life; subsequently increasing their self esteem.

However when confronted with the idea that labelling something as special means that there must be something that is not special to properly distinguish that which was considered special, many individuals may become troubled by this notion. To then overcome this issue many individuals will employ a series of responses, perhaps the most common being that: 'everything is special'.

We live in a world where the idea of everything being special simply does not ring true, but nor does the idea that 'nothing can be special' seem true either. Different individuals in particular contexts will feel that certain things are special to them.

As we view things in this world and universe in a limited way due to our own limitations, everything will be viewed subjectively by every individual; human or otherwise. Therefore as everything and everyone is different, certain things will appear special to some, while seeming ordinary to others.

Therefore the idea of 'special' can only really be used in a very subjective way and within particular contexts.

Unique rather than special.
In terms of our current, and most likely future human experience, the word 'unique' is far more apt. As previously mentioned every individual to some degree, even if it is seemingly minute to us, is unique and will always be so. This includes things we may subjectively consider to be the same - such as grains of sand or ants.

On close enough inspection, literally every ant or grain of sand will appear unique. Although obviously you need the natural skill or technology to be able to observe this properly. This is why we usually consider a line of ants, or a handful of sand granules to all be the same with our unaided and limited eyesight.

At first the idea of 'unique' may not seem as appealing as the idea of 'special', as special denotes something that is positive, as opposed to the idea of uniqueness, which can be either positive, negative, or subjectively neutral. This is why certain people may prefer to be called special, rather than unique.

Life and the entirety of existence however is not sentimental and does not label specific things or entities as special; it takes an individual to subjectively label something this way. The concept of uniqueness however has always been and will always be true, whether we as humans are here to label something as unique or not.

If you are still uncertain about this idea, the reason for why everything is unique is better spelled out in my book: The Reason For All Existence.