Is Anything or Anyone Literally Pointless? 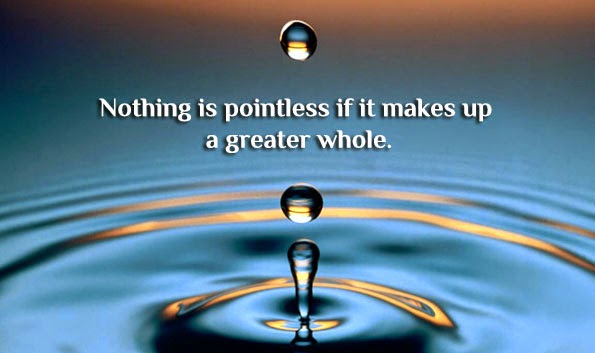 Some people may wonder if their lives have made any difference at all. If they had never existed would the world have carried on exactly the same?

Most of us would think that if certain things suddenly vanished, like a single drop of water from the ocean, it would literally make no different to the world at all.

How many drops of water would it take to vanish from the face of the Earth before the average person felt the consequences? A billion drops? Ten trillion drops? Where is the cut off point between when we notice that there is less water in the ocean and when we don't?

It will of course be subjective. The power of someone's observational skills determine when they notice change. Therefore we should always remember that: just because we don't notice the effect of a single drop of water (or anything else), it doesn't mean that it has no actual effect on the world.

Even if a single drop of water in the ocean is merely the difference between whether a particle of rock on a cliff face erodes a second earlier than it otherwise would - it is still a difference.

Likewise if you suddenly removed anyone from the planet - if they vanished into thin air - it would have an effect, whether we noticed it or not.

This would be true for literally everyone; even a homeless person without friends or family. One homeless person begging for money on a particular street could make some people more aware of the inequities in society.

Even someone living in a cave - far removed from our modern society who doesn't interact with any other human being, still affects their surrounding environment in a multitude of ways.

Some may say that many of these effects are pointless as they only produce negative results. It is in fact these negative occurrences that aid in our learning in terms of knowing how to positively better ourselves and the society/world we live in.

If we for instance went "back in time" to eradicate every racist (a rather ambitious act), this would not eradicate racism. It would merely begin anew as the issue would not have come up and been appropriately dealt with through the educating of individuals - not to say that it's been adequately dealt with at present, but that is another matter.

Everything and everyone does have some effect on their environment whether we notice it or not. Many of these effects can be positive, while negative effects challenge us to learn, and to improve as both individuals and as a society.

A more thorough look at this idea and others can be found in my book: The Reason For All Existence.